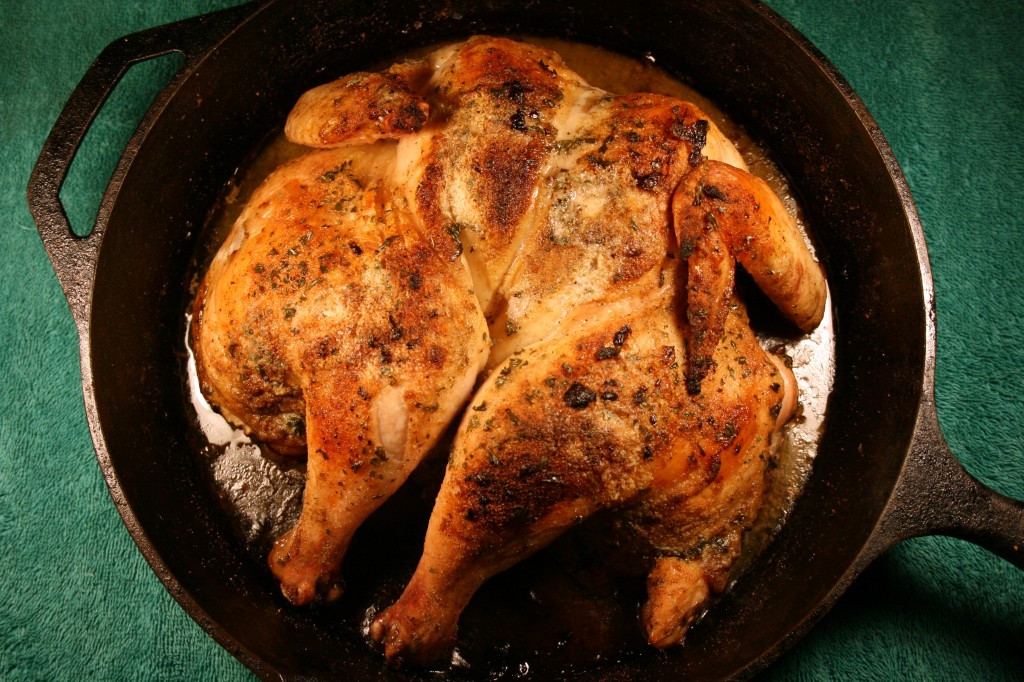 To all those who have trouble cooking a roast chicken please continue reading, for I have a solution for you. To everyone who thinks they have made a good roast chicken you should also keep reading, because you may be wrong. Being able to roast a chicken is a good skill to have, but when you find a big one at the store there is always the challenge of getting the meat evenly cooked, considering the meat is not evenly distributed around the cavity. One solution is sticking it on a full, open soda can and letting the soda keep it moist while standing on end and cooking. The can method works, but to me the meat gets an odd flavor. It might have been the fact I don’t much like Dr Pepper, but it just tasted odd. Splitting a chicken in half and cooking it in an iron skillet results in an amazingly moist, flavorful chicken. Since the bird is laid down almost flat the meat cooks evenly so the dark meat gets cooked instead of running red, and the white meat does not overcook for the sake of the dark meat. It also maximizes exposure of the skin for crispiness. The first time I used the spatchcocked method I did not expect much of a result different from when I roasted with the bird whole. When we started eating it, not only were the herbs and spices more evenly distributed in the meat, but taking the bird apart and carving it up was easier, because it was flat and easier to manipulate. If you try it you will like it, and it is also great for helping to season an iron skillet! Enjoy!

Preheat oven to 375F. Place chicken on a cutting surface breast side down. Using a knife cut skin and meat down to the bone, following the spine. With a sturdy pair of scissors cut right along both sides of the spine to remove it. Turn chicken over and press down in the middle between the wings until the wishbone breaks and the chicken lays down almost flat. Take care not to push it completely flat to the point the ribs break – that is too far. Squeeze lime juice onto both sides of the chicken. Also gently pull skin away from the meat in a few places and drop some of the juice between the skin and meat. If you have fresh herbs you can slide a sprig or two of parsley, sage or thyme under the skin to add some extra flavor. Sprinkle salt and pepper on the bottom (formerly the cavity) of the chicken. Place chicken in large iron skillet skin side up. Get your hands dirty by spreading the butter all over the skin side of the chicken, including crevasses, until it is all gone. Sprinkle salt, pepper and herbs all over butter. Cover with foil and put chicken in oven and cook for about an hour, removing the foil after about 30 minutes. The chicken is done when a thermometer reads 160 degrees and juices run clear. Remove from oven and let rest for about ten minutes.