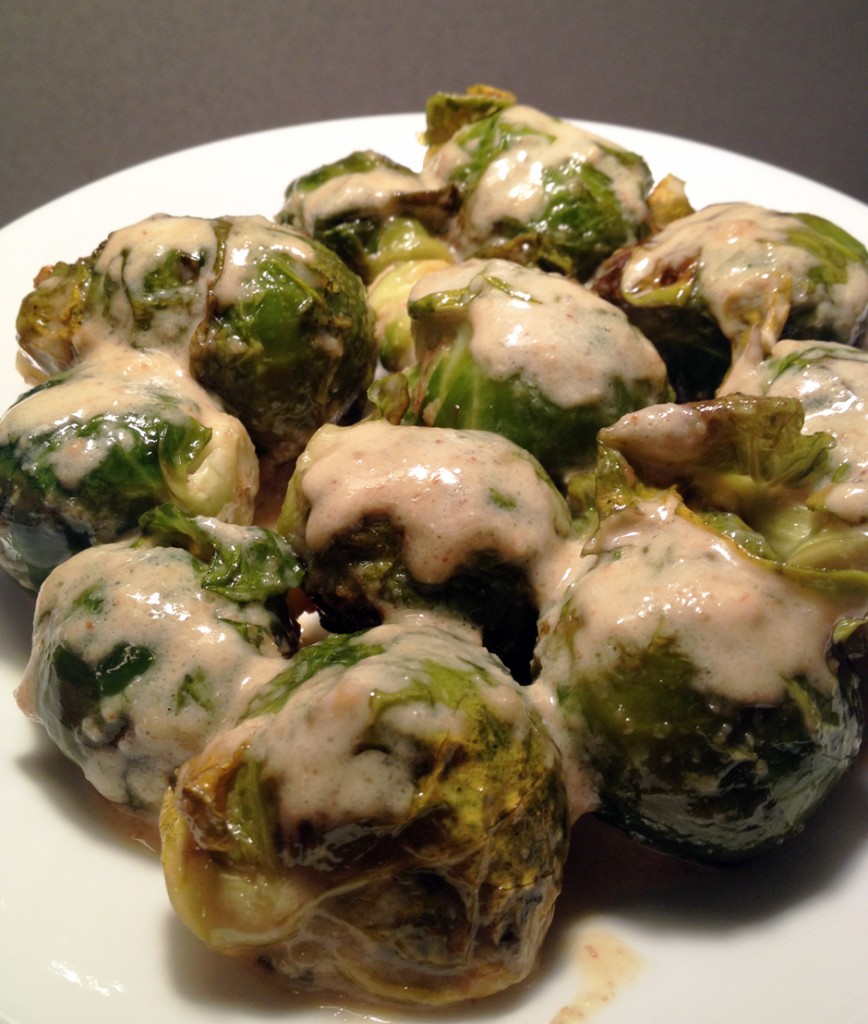 Could I ignore it? Just walk by as if it was not there? Pretend it would not be loads of fun to explore? No, I was not strong enough. It drew me towards it like no other stalk. I became a stalker. A stalker of of brussel sprout stalks. I thought maybe I should deny myself yet another green vegetable, but why?! I seem to be on quite the green vegetable streak these days – asparagus then artichokes, and now brussel sprouts! Big D has been doing a lot of meat and soup cooking, so I enjoy the yummy stuff when I get home and fill in the vegetable part of meals where I can. Brussel sprouts are a relative of green cabbage – high in fiber, good for you and the sprouts grow on stalks! I usually see them in the store in bags, but this week they arrived on the stalk. How fun! Little B was so excited about this strange thing when I got home she could not stand to wait until they were cooked. Whenever I can I try to show Little B where food comes from – whether it is pulling wild garlic, to showing her vanilla comes from orchids, her breakfast sausage comes from pigs, or the plants that are the source of her popcorn. I showed her the stalks and explained what the sprouts were. Little B immediately wanted one raw. Um, okay. I gave it to her, she took a big bit and LOVED IT! Chewed it up like Halloween candy! 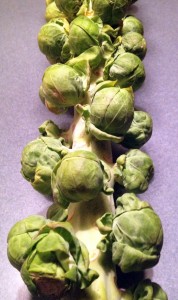 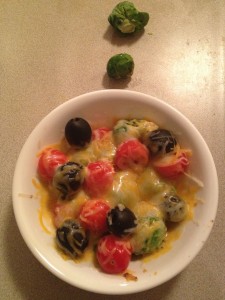 I had to promise to cook them up as soon as possible because she would not leave me alone about them. This could get interesting. Sometimes I have to coax Little B into helping with cooking projects and other times I can’t keep her from being overly underfoot (in a good way). This was definitely an underfoot project. She helped me cut them off the stalk and cook them up.  I had a plan and she had a different one, but we figured out how to combine them, and an ordinary weekday evening turned into a stalker party! We came up with two dishes in the end – one that she liked and one that I wanted. The cool thing was the two dishes took the same route to a point, then easily diverged to make everybody happy. Besides raw she tasted them sauteed in the butter, then with her added veggie and cheese, and also after adding the cream to the butter saute. Apparently she prefers them raw, but I think the creamy sauce balanced out the natural bitterness of the sprouts. I am very happy to learn of Little B’s continued interest in green vegetables – from when she started gnawing on frozen broccoli during her teething period as a baby, to snacking on green beans to the brussel sprouts of today. What has your kid eaten and liked that surprised you?

Cut sprouts off of the stalk, leaving enough stem on each to hold the sprouts together. Melt butter over medium heat in large saute pan you can cover later. Add garlic and cook until you can smell the garlic aroma. Add sprouts and toss to coat them with butter. Sprinkle with salt. Cover and let cook until sprouts are softened, about ten minutes. Lower the temperature to simmer and add the cream. Gently stir – enough to blend the cream into the sauce, but gently enough to prevent the sprouts from falling apart. Simmer covered for a few more minutes until the sauces is hot, bubbly and begins to brown, about four or five minutes. Serve immediately.

Little B’s version – after sprouts are cooked and softened in the butter, transfer a serving to an oven or microwave-safe bowl. Add some grape tomatoes and black olives cut in half. Sprinkle with grated cheese. Microwave for about one minute, or bake in oven at 300 degrees for about five minutes until cheese is melted.