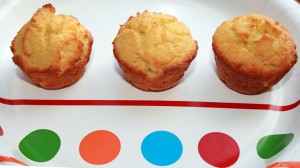 How do you get cornless cornbread? Don’t put corn in it! And aren’t they cute? Big D made some awesome chili the other day and of course cornbread goes great with chili. Alas, the wheat and corn in traditional cornbread aren’t the greatest foods in the world to consume. Over the holidays we tried some low carb, corn free versions of ‘corn’ bread to make stuffing. It was okay, but the flavor and texture was not as close as these tasty little muffins. We previously tried to copy cornbread texture with flaxseed meal which did a pretty good job, but I look forward to trying this version next time we make dressing. I cooked these up in a mini muffin pan and easily got 20 muffins out of one batch of batter and cooked them for only 20 minutes – one minute per muffin – go figure. They were a bit on the dry side, compared to actual cornbread I have made in the past, but we easily resolved that issue with a slather of butter on top. Poor us. I may also try to do some kind of ‘corn dog’ version for Little B with some sausages and a larger muffin pan. I will let you know how they turn out!

Preheat the oven to 400 degrees. Whisk together the coconut flour, salt, and baking powder. In another bowl, beat the eggs. Whisk in the melted butter. Add the coconut flour mixture to the egg/butter mixture and stir to combine until it forms a wet dough mixture. Divide the batter among 12 greased muffin tins or 20 mini muffin tins. Bake for 20 – 25 minutes or until golden brown. Let cool before removing from pan, or burn your fingers by removing them immediately from the pan to split and melt butter on the halves before eating them too soon and burning your tongue.

Adapted from the recipe here.

2 thoughts on “Cornbread Without Corn”