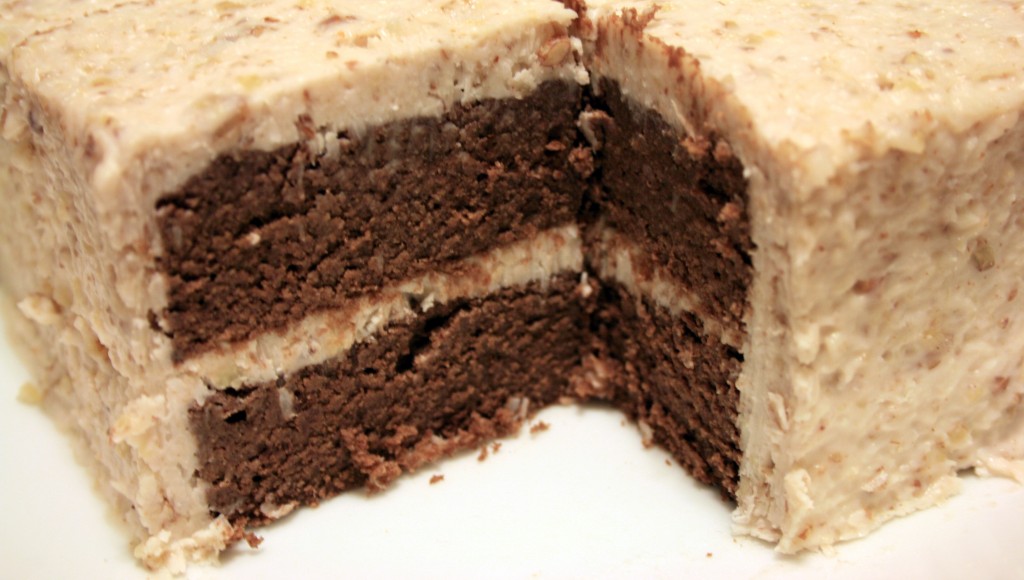 A special treat for a special guy. Big D’s birthday happened a few days ago, and on the short things he actually wanted was a German Chocolate cake – his favorite kind. To keep with our diet of low carbohydrates, no sugar and few grains, I felt a challenge coming on. Is there a way to make a German Chocolate cake following those guidelines? I knew it was out there somewhere. I searched and experimented and finally found one that I thought would work. And it did! He was so happy with the rich, dense cake to top off his birthday. He leaned back from the table after eating it with a big grin across his face, surrounded by his consumable and functional presents (he is not a buy-me-something-to-sit-on-a-shelf-so-I-can-dust-it kind of guy). 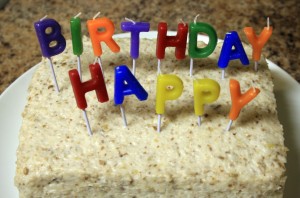 Good thing that German Chocolate cakes are coconut centric by nature, because the coconut flour worked really well. Of course, being cake, Little B scarfed down a whole piece, clueless about how good for it actually was. For this effort I pretty much followed the instructions closely from Maria’s blog here. She has a bunch of other absolutely delicious recipes, so check them out too! The only variation I did to the noted recipe was use a 9×13 pan instead of two round cake pans. After the cake was frozen it popped right out of the baking dish, I cut it up and trimmed the edges off to make a rectangular two layer cake. The recipe cooking times and frosting quantity were both effective for my approach, so I don’t recommend any changes. This approach also gave Big D another birthday treat. He grew up watching his grandmother trim and decorate special occasion cakes, nibbling on the cake scraps while he watched. When he saw there were cake scraps from this cake his face lit up like he was a little kid. I will definitely be making this cake again, maybe experiment with some other flavors for the holidays. If nothing else, I surely know when I will make it German and Chocolate, in about a year…

In a saucepan, melt the coconut oil (or butter) over medium heat. Add cocoa powder and mix well. Remove from heat and cool. In a separate bowl, beat egg whites and cream of tartar until stiff peaks form; set aside. In another bowl mix together coconut milk, 2 whole eggs, 8 egg yolks, sweetener, salt, and vanilla. Slowly mix in cocoa mixture. Add coconut flour into batter and mix until it is very smooth. Fold egg whites into batter. Pour batter into 2 greased round 8 or 9×1½-inch layer cake pans. Bake at 350 degrees F for 30-35 minutes or until a toothpick inserted into the center comes out clean. Cool (I put mine in the freezer overnight…it frosts really easy then). Fill layers and cover top and sides of cake with Coconut-Pecan Frosting

One thought on “German Chocolate Cake”