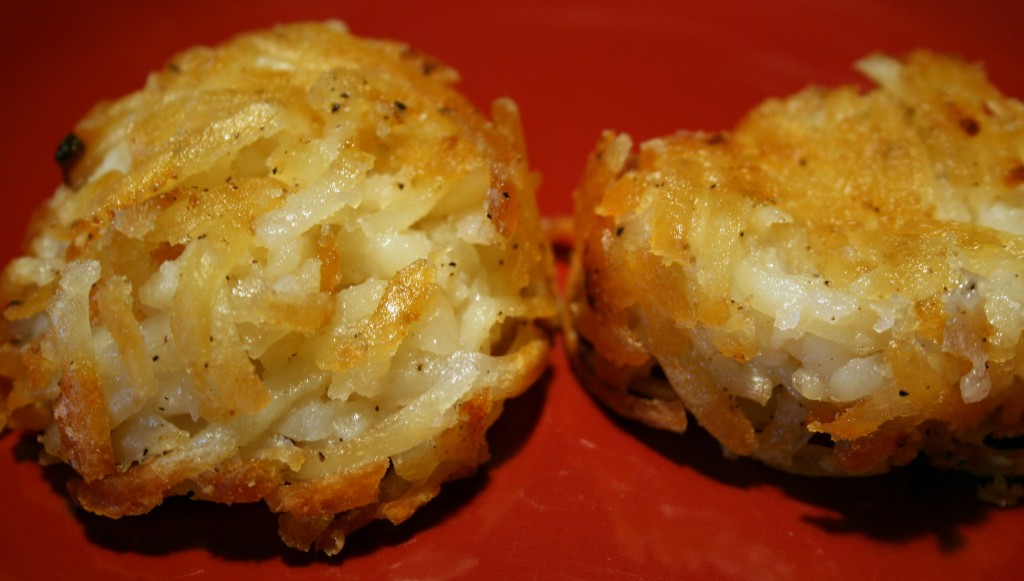 We are still living sans kitchen. I am starting to dream about cooking things that are sauteed, baked, seared, broiled and browned. Pretty much things you can’t do in a microwave. Speaking of brown…I like my hash browns brown. Some of them can be unbrown, but I like the crispy parts and the almost crispy parts the best. Especially with a little hot sauce, salt and pepper sprinkled on them. I first made these hash brown cups for a brunch when I was not going to have enough time before it was time to eat to cook them properly. I have not done it yet, but I am thinking of having a cuppy brunch some day – hash brown cups, eggy cups and maybe some cinnamon roll cups. Then I can be really creative and serve beverages in cups and everything will be just cuppy! Okay, now that tangent is out of me I can return to the hash browns. If you make them ahead of time a bit of the crispy may be lost, but they reheat just fine. The picture shows some I took out a bit early because I was running late for an appointment, so don’t do as I do, do as I say!

Preheat oven to 375F. Mix all ingredients in a bowl. Divide potatoes among 12 well greased muffin pan cups. Bake for about an hour until bottoms are crispy. The potatoes touching the pan will brown but the very tops will not brown much at all. Remove from oven and let cook for about 20 minutes. If you take them out too soon they may not keep their molded form, so avoid the temptation to take them out early unless there is actually a problem and smoke is pouring out of the oven.