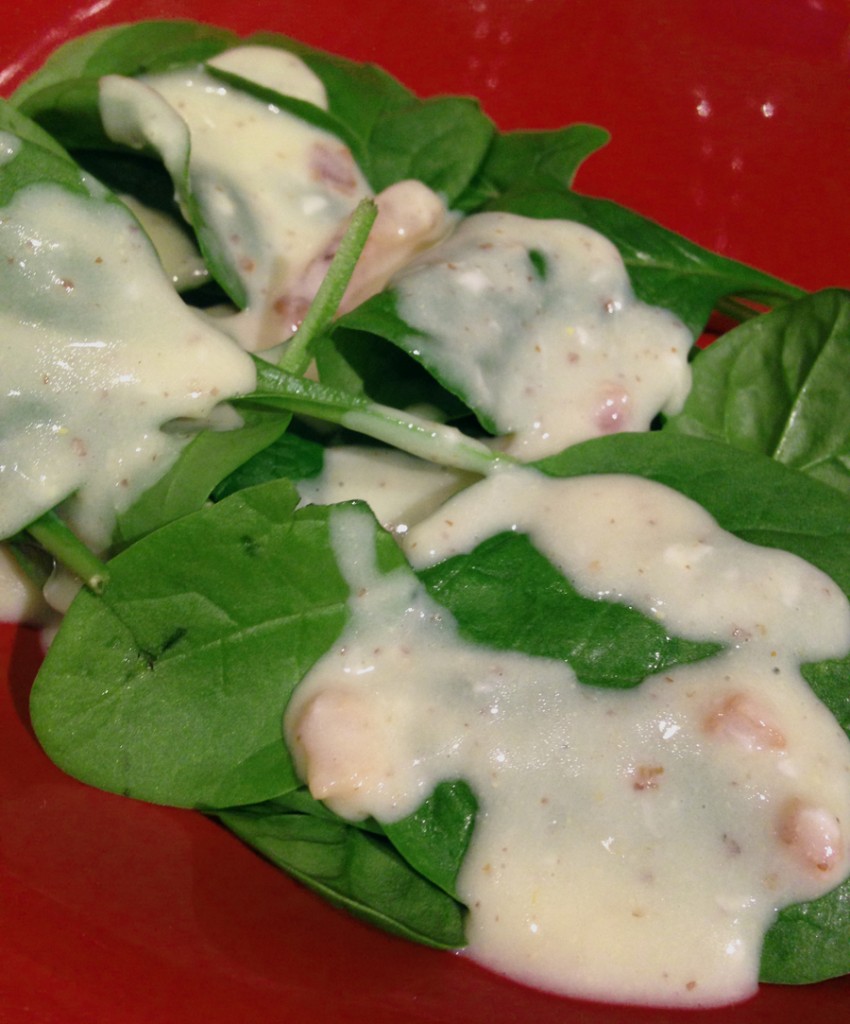 I am sure I have previously discussed my love for spinach. As a child I was a fan of Popeye and never understood the scrunched up faces of other kids facing the green stuff on their plates. As I got older I craved salads with deep green spinach over the pale, watery nature of iceberg or other lettuces. The term ‘hot’ used for this recipe can mean two things – spicy hot and temperature hot. Other versions of the dressing can be heated up much more so as to clearly wilt the spinach as it is poured. This version, since it relies on egg as a thickener instead of flour or other powders, cannot be made so hot. I rely on the spicy version of the word hot here instead. The tang of the vinegar along with the heat of the horseradish and mustard make it so. It will probably not wilt the spinach, but will still leave a mark on your palate. The picture shows the dressing being used simply on raw baby spinach as a side dish. If I have the salad as a main course I will add onion and soft boiled eggs, and other veggies as I please. Here, it was a way to quickly boost the veggie/protein ratio at dinner one night. The dressing can also go on top of other side dishes, for it has a tang that would compliment broccoli, squash, asparagus, and so forth. If you heat it up leftovers do it gradually in the microwave at half power or low on the stove so as not to create scrambled eggs.

Cook the bacon over medium high heat in small pan until crisp. Crumble bacon and set aside. Turn temperature to low under bacon grease and let cool to the lower temperature. Add water, vinegar, sweetener and mustard, stirring until combined. Whisk in egg and continue stirring constantly so the egg does not cook firm. When the egg is fully incorporated add crumbled bacon, continuing to cook and stir under heated through. Taste and add salt if needed. Turn heat up to medium, continuing to stir, and heat until steam rises from the dressing, about two minutes. Serve immediately over raw baby spinach, optionally including onion slices and soft boiled eggs sliced in half.