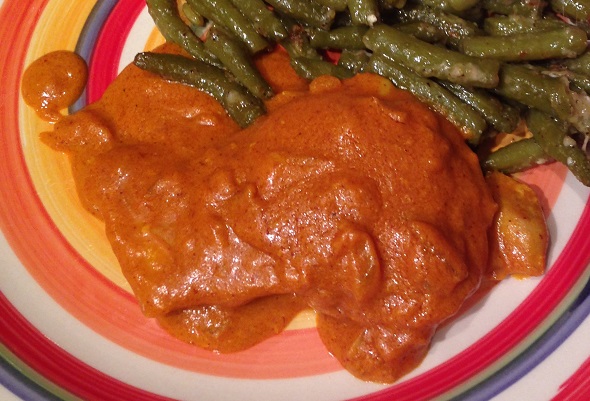 A while back my brother lived in an apartment complex. Not one of those little ones with just a few units, but a huge corporate monstrosity with dozens of buildings. It was not the most interesting place he has ever lived – the house on a hill in Austin with a concrete bathroom holds that honor – but it was convenient to his work and reasonably priced. There was not much around it but his office and a few local markets, all of which had a common theme – Indian food. We did not do much Indian cooking when we were younger, but the convenience and variety of ingredients, as well as the opportunity to learn from his neighbors, resulted into a foray of curries, colorful sauces and a little (or a lot of) heat. He has since moved into his own house, but carried with him the Indian food immersion from his apartment days. We are having a long visit with him, and I am looking forward to learning a bit from his experience. I am looking to play around with traditional ingredients and flavors, not necessarily copying specific dishes. Here is my first gander at being inspired by a Northern Indian dish called Butter Chicken. It is far from accurate, so I am not even trying to use butter in the title. It was great. On top of everything else, today is the eleventh wedding anniversary for me and Big D. My ongoing quest to find chicken dishes he likes has spanned the entirety of the eleven years. He is a beefy kind of guy, begrudgingly consuming chicken if absolutely necessary. He gushed with joy and satisfaction upon tasting this dish. I definitely added it to the ‘like’ category for him. Little be was not as impressed with the dish, but still ate her fill, including the green beans I cooked up to go with them. You should see what we do with the leftover sauce!
Red Chicken2 Tbsp butter
6-8 sinless boneless chicken thighs
1/2 white onion finely chopped
4 cloves garlic, finely chopped
1/2 cup natural peanut butter
15 ounces tomato sauce
1/2 cup lemon juice
2 Tbsp ground turmeric
2 tsp ground ginger
1 tsp ground cinnamon
1 Tbsp cayenne pepper
1 tsp sea salt
1tsp ground black pepper
8 ounces full fat coconut milk

In medium saute pan over medium high heat melt butter. Add chicken and partially cook, about five minutes. Remove chicken from pan and set aside. Add to the the chicken juices the onion and garlic, cooking until browning begins. Add remaining ingredients except for coconut milk. Stir until all ingredients are combined, turning down heat to medium low, and simmering for about ten minutes until hot and bubbly. Add coconut milk and stir again until combined. Add chicken and simmer until cooked through, about ten more minutes. Serve immediately.