Archive for the category “S&K’s Kitchen” 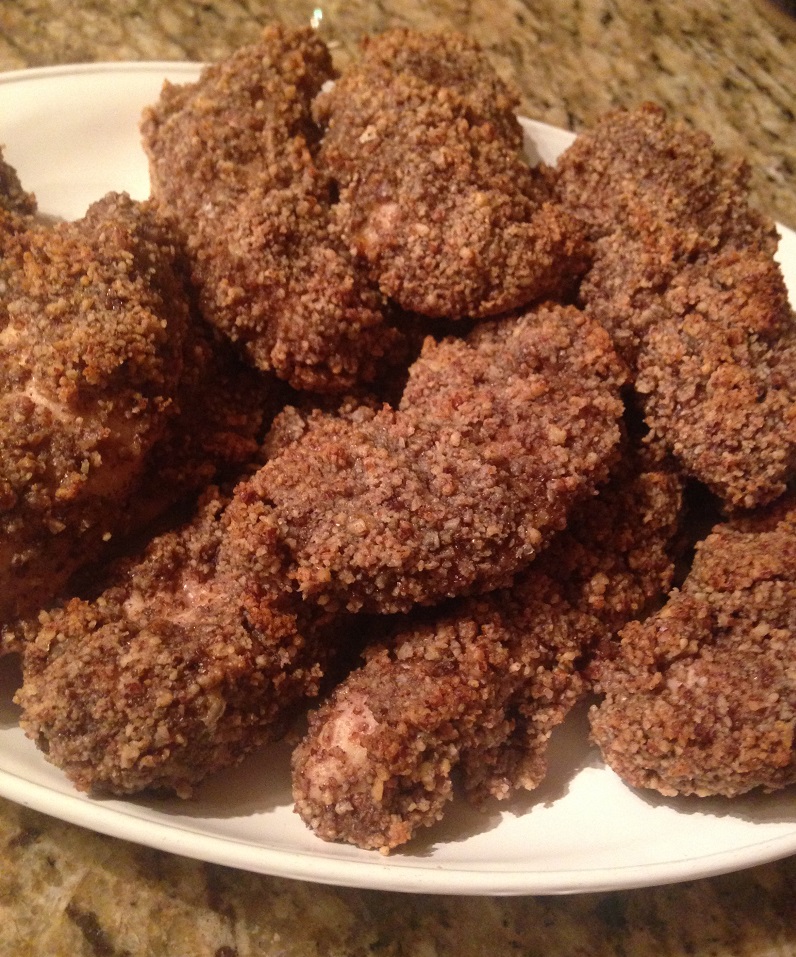 A few years ago we stopped eating wheat for a number of reasons. We have not been perfect about it, but try really hard. It is amazingly difficult to avoid wheat in convenience foods at stores and restaurants in America. Take a quick look at kid menus in quick serve and sit-down service restaurants – you are most likely to see choices like burgers,  grilled cheese sandwiches, corn dogs, macaroni and cheese, and some sort of breaded chicken. Most often included are the lovely and mysterious chicken nuggets and tenders – lovely because they are often crispy and mysterious because it not always clear what parts of the chicken are tendered or nuggetted. Little B and I like having such things on occasion, and am glad I have found a few versions that are not only wheat free but completely grain free. I like using the baked crispy chicken recipe for tenders and nuggets too, but wanted something with a little more crunch and bulk. The pecans sure fit the bill in this new recipe! The nuts chop up into various sizes, adding a nice texture which mixes well with the chicken. Little B eats them plain, but I like dipping in spicy dressing or mustard. They are filling too – instead of feeling hungry soon after eating like with wheat, the nut coating fills me up fast and keeps me full for a while. My in laws generously let me take over their kitchen during a recent visit and really liked them. Little B inhaled this stuff too – another score!

Preheat oven to 400 degrees. In a food processor pulse pecans, salt and garlic powder until nuts are finely chopped. In a medium bowl whisk together egg whites and mustard until well combined, but stop short of the whites becoming stiff. Line one to two shallow baking sheets with aluminum foil. Spread the nuts on a third sheet or large plate. Generously season chicken with salt and pepper. Dip the chicken in the egg wash, letting the excess run off. Roll chicken in the nuts, gently pressing them into the meat. Place chicken on the foil lined baking sheets with about an inch between pieces. Bake for 35-45 minutes, until juices run clear (whole chicken breasts or bone-in chicken may take longer). Serve immediately, plain or with desired dipping sauces. 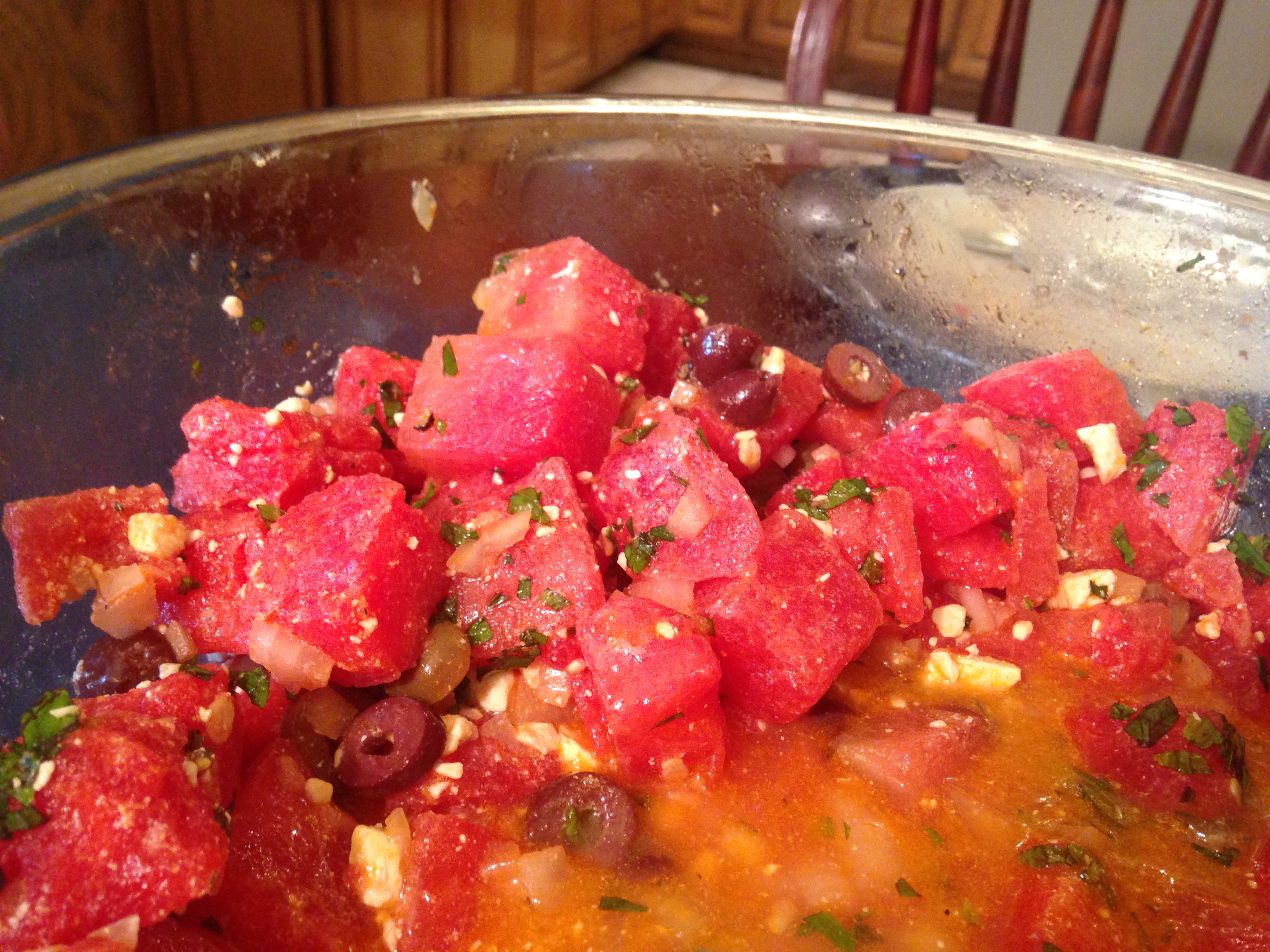 As kids my brother and I spent summer afternoons outside a lot. We were able to cavort around our neighborhood bicycling, rollerskating, swimming, playing soccer and other things kids did in the 80’s ‘on the streets’. One of the snacks we ate was messy, juicy, sweet watermelon. Mom would cut it up and bring a bowl out to the back yard. We would take a break from gardening or playing in the sprinkler to feast on it, sprinkling each wedge with a bit of salt and letting the juices run down our chins. After we were done we often had seed spitting contents. The watermelons we  had were always riddled with slippery black seeds. We would save them up as we ate, then would have the contest. There were occasional arguments about whether seed bounces counted in spitting distance, or whether one of us stepped over the spitting line when getting a running start on a spit. To this day I am surprised there weren’t more watermelon plants growing rogue in the yard. This may be the oddest sounding salad I have ever made, but it was curiously satisfying. On a warm summer day in Texas I was looking for something other than a green side salad at dinner. We don’t eat much watermelon, considering the higher carbohydrate count for the fruit, but I am glad I plunged in with this salad. Very refreshing, and quite a different slant compared to the spiked Whiskey Watermelon I made a few years ago…different type of satisfying…

Prepare about 8 cups of watermelon in bite-sized pieces by cutting it into 1-inch cubes or using a melon baller. In a medium bowl combine the olive oil, lemon juice, salt, pepper and chili flakes. Whisk until combined. Add the feta, olives and onion. Stir to coat with the dressing. Add mixture to watermelon and gently toss, trying not to crush the watermelon pieces.  Sprinkle mint and more salt to taste on top. Serve immediately or chill until served.

Note: as you can see from the picture the watermelon juices will mix with the dressing build up as the salad sits. It is recommended that a slotted spoon is used to serve, to reduce the soupiness of the salad when plated. 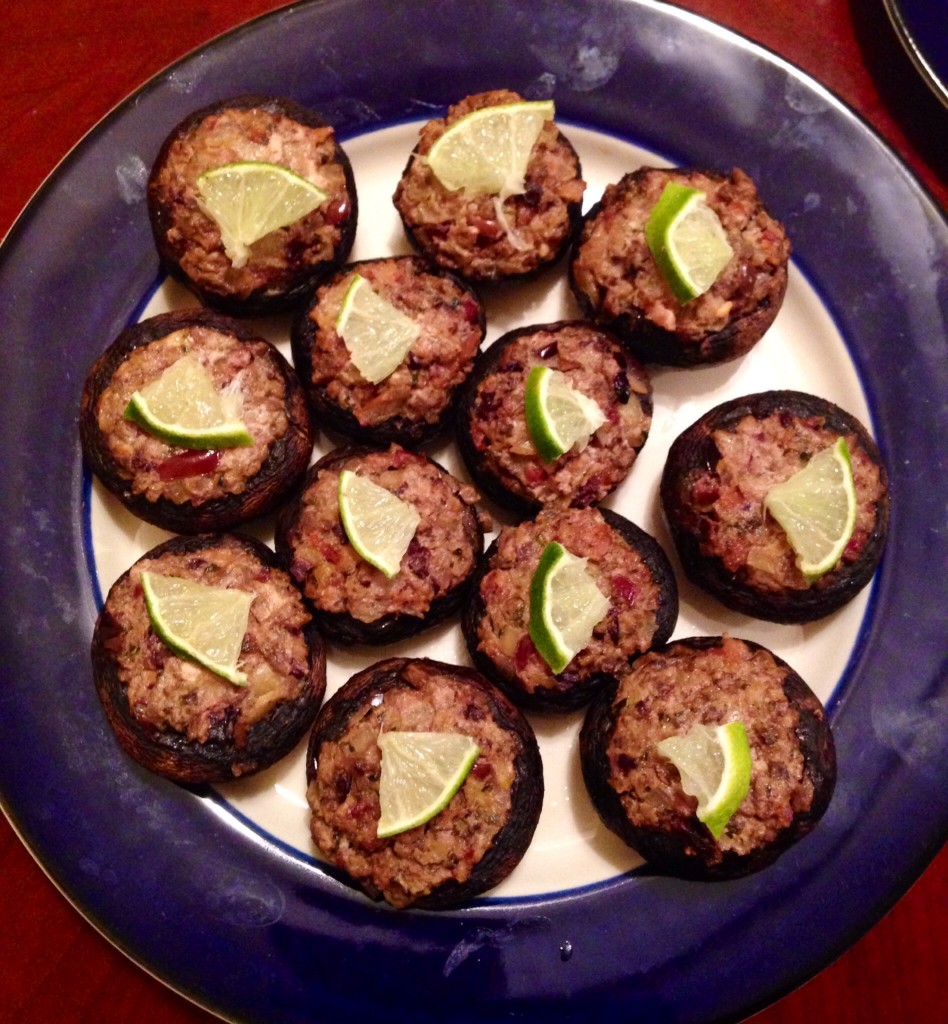 Have you ever felt like you are being watched? I did just the other day. I was sitting on my mom’s patio and suddenly felt like I was being observed, with the strong need to figure out what was doing it. No people. No pets. A few birds were out there, but they were busy with the feeders. In the end I decided it was the basil. Tall, healthy stalks rising out of a huge pot, with big, bright green leaves soaking up the morning sun. They were leaning slightly in my direction, so the little leaves at the very tips of the stalks worked like cyclop eyes…I decided the only way to rid myself of the paranoia was to use some basil. It wants me to, right? A functional plant that just happens to be pretty, too? I was sure mom’s well stocked fridge would reveal a wealth of ingredients to go with the stalking stalks. As you can see from the list of ingredients I was right. I called them Kelley’s Stuffed Mushrooms because Kelley likes all things Greek, and these have a leaning in the Greek direction, and they would be consumed at her house. Besides all that, she is one of the most awesome people on the planet. This is not my first Greek themed dish, but it is the first time I remember splitting kitchens when making a dish – prepared in one kitchen and cooked in another. These lovely ‘shrooms went stuffed but uncooked with us to a dinner party, and were baked in S&K’s kitchen right before serving. I do think transporting the broth separate from the dish was a good idea, though. Adding the little lime wedges helped add a bit of color, and squeezing a bit on right before enjoying them brought out the lovely flavors of the cheese and olives.
Kelley’s Killer Stuffed Mushrooms
12 baby Portabello mushrooms
2 garlic cloves, finely diced
1/4 medium white onion, finely diced
12 kalamata olives, pitted and finely chopped
3 slices of bacon, cooked crisp and crumbled
4 quarters marinated artichoke hearts, finely chopped
1 cup crumbled feta cheese
8-10 fresh basil leaves, chopped
1/2 tsp ground oregano
1/2 lime, juiced
2 Tbsp extra virgin olive oil
1/2 cup chicken broth
Salt to taste
Lime, thinly cut into small slices (garnish)
Remove stems from mushrooms. With a small spoon scrape out brown gills from each mushroom cap, making more room for the stuffing. Finely chop the stems and scrapings. In a large skillet over medium high heat add the oil. When oil is hot add onion and garlic. Cook until soft. Before onions and garlic begins to brown add the chopped stems, olives, bacon, artichoke hearts, basil and oregano. Stir occasionally until stems are soft and combined with the other ingredients. Add feta to the pan and stir until it is melted and combined. Remove pan from heat, add juice from the half lime and stir. Preheat oven to 375 degrees. Divide stuffing among the mushroom caps, placing them, spaced evenly, in a 9×12 inch baking dish. Slowly pour the broth in the pan, making a shallow pool under the caps. Place pan in oven and bake for 30 minutes, until mushrooms sweat and shrink. Remove from oven and let sit for about five minutes. Garnish with small lime slices and serve.
Posted in artichoke, baked, garlic, Mom's Kitchen, S&K's Kitchen, side dish, vegetables, wheat free | Leave a Comment