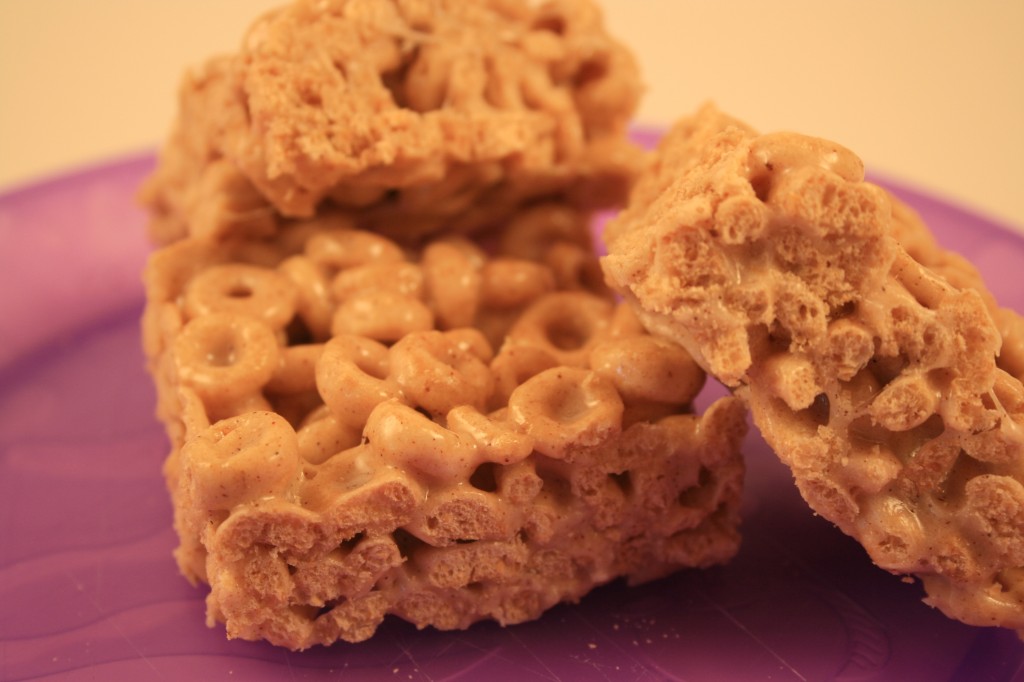 My little girl likes Cheerios®. Specifically, she likes Cinnamon Burst Cheerios®, and has recently decided that a tidy little bowl of dry cereal is not as novel as it used to be. Now she wants milk on it. Since she often eats cereal while secured in her car seat as I am driving, her new penchant for milky cereal has put a crimp in my ability to transport her and have her clothes dry upon arrival at our destination. I decided to try and find something even MORE novel than cereal in milk. Since she also likes marshmallows my mind was led to a logical conclusion – cereal treats. Although my childhood was filled with crispy rice treats, my girl could care less for snap, crackle and pop. She likes her Os; therefore, I will give them to her. This recipe works great for snacking while driving, although her hands may be a bit sticky when we arrive. I found the recipe here. I used the Honey Nut version and dumped in some extra cinnamon because, well, cinnamon is good. Otherwise, I followed the simple recipe as presented.

Butter a 13×9-inch pan. In a large microwavable bowl, microwave butter and marshmallows uncovered on High for about 2 minutes. Stir every minute, until smooth. Immediately stir in cereal until evenly coated. Using buttered back of spoon or hands, press mixture firmly in pan; cool. For bars, cut into 6 rows by 4 rows. Store loosely covered.