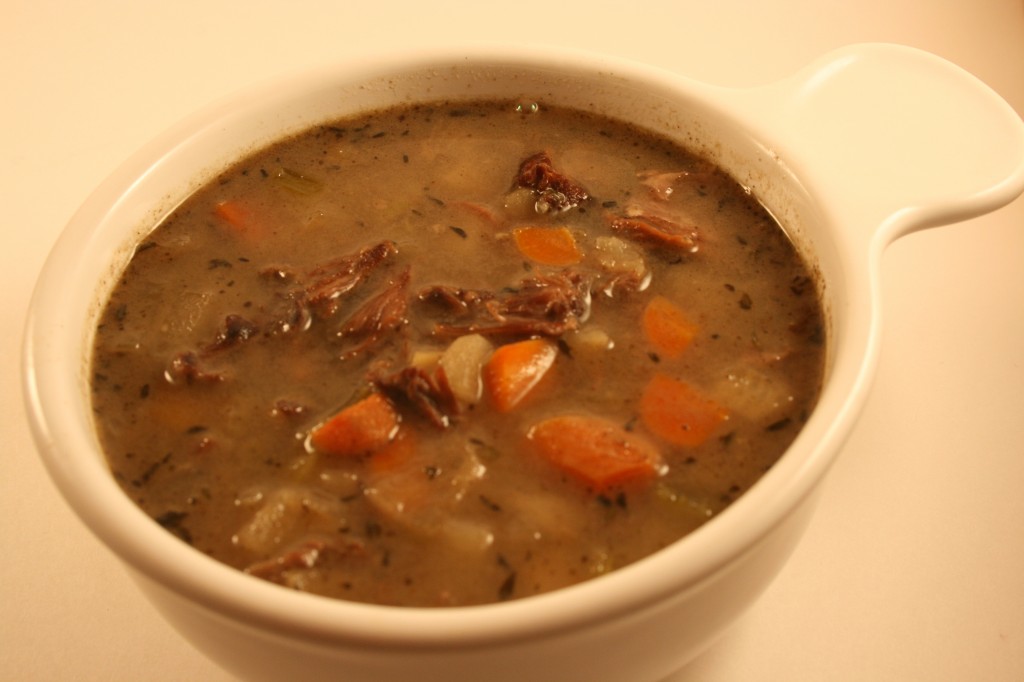 Yet again, I am making soup. And yet again it is something my dad used to make, but I am putting my own spin on it. Hang in there with me – I promise that soup on my menu will decrease significantly as the temperature outside rises. I don’t do well with warm liquids in warm weather. Just doesn’t seem right. Now, on with the soup…

My dad learned how to make oxtail soup in Germany where, as in most places of the world, every bit and piece of slaughtered animals was used. It has a rich sauce and the vegetables melt in your mouth. He would leave the meat on the bones and we would each get one in our bowl. As a kid it was fun trying to get all the meat out of the little crevasses. The dog was always hanging around, trying to wait patiently for the bones.

Oxen have meaty tails, and the meat is pretty tender. Of course, most meat is tender after being boiled for three hours. The oxtail is traditionally considered one of the more lowly cuts of meat. I mean, you don’t typically find oxtails on the menu of fine dining establishments, but in many places of the world soup made with them is very popular. The marrow adds extra depth of flavor to the broth. The meat and simple vegetables in the soup are relied on to warm bellies on cold winter nights.

Since Ireland is one of the countries traditionally relying on it as a staple dish, and it is still soup season (aka winter) in some parts of the U.S., I give you as one of my Irish dishes – the lovely and rich oxtail soup. I actually decided to take pieces of recipes from my dad, my own recipe collection, as well as those from China, Korea, Jamaica, Hawaii, Germany, the US and of course Ireland…you get the idea. I guess it is more of an International soup made with an American ox.

The day before making the soup the oxtail pieces need to be cooked. In a deep pan on the stove top (I used a dutch oven) heat the oil, add the oxtail pieces and sear on all sides. Add the salt, garlic, water and wine, bring it to a boil then lower heat, cover and let simmer for about three hours. When cooking is complete the meat should fall off the bones. Let cool until the meat can be handled and separate broth from the bones and meat. Store the meat and broth separately in the fridge overnight and give the bones to the dogs. The next day skim off/remove as much fat and garlic as you can from the broth and discard. The broth will mostly be in a gelatinous form, but will liquify when heated. If there is fat you can remove from the meat, then do so. Return broth and meat to the stove top pot (or a crock pot), add all the vegetables, meat and herbs. If the liquid is not covering all the vegetables you may need to add a cup or so of water or beef broth, but wait until it is warm because it might not be necessary. Simmer on low for about three hours until the vegetables are tender (or six hours in a crock pot). Add salt and pepper to taste. Serve hot.

*A final, optional step can be to add some thickener to the soup. I do not take this step because I want the soup to be wheat free. To thicken, draw out about ½ cup of liquid from the soup. Add 3 Tablespoons of flour and whisk together until all lumps are gone. Add the thickener to the soup, combine with the rest of the soup and let cook for the last ten minutes.