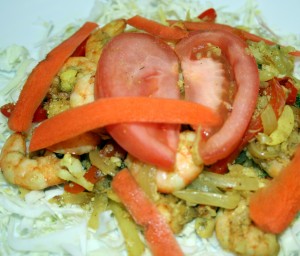 I didn’t want a hot meal, but I also did not want a cold meal. Between Big D and I we came up with this flavorful, crispy concoction. The vegetables are either raw or cooked just until warmed up – maximizing the nutritional potential of them all. A perfect match for shrimp, which needs very little cooking to be ready to eat. The spiciness made us feel full pretty quickly. No lead belly after this meal! We were excited about our find at the store – big, fresh shrimp calling to us. Our past is filled with Gulf Coast shrimp by the bowl full. We grew up sitting at dinners filled with peel-and-eat shrimp dipped in spicy horseradish cocktail sauce, complimented by boiled corn on the cob and new potatoes. For this dish it was Little B’s first attempt at peeling raw shrimp. The first one was pretty mangled, but serious improvement on the subsequent little shrimpies. You should see her peel an onion these days – masterful!

Heat two Tablespoons of the oil in large skillet over medium high heat. Add chili flakes and let sizzle for a few minutes. Add garlic, onion, bell pepper and jalapeno. Saute until onions begin to sweat. Sprinkle in turmeric, cumin, cinnamon and salt, and toss until vegetables are coated. Add cauliflower and cook a few more minutes until it begins to sweat. Add shrimp and toss. Place tomatoes on top of mixture. Cover skillet and cook for about five minutes, until shrimp are cooked and pink. On serving plates spread ½ – ¾ cup cabbage. Add 1 – 2 cups shrimp and vegetable mixture, then top with carrot strips. Serve immediately.