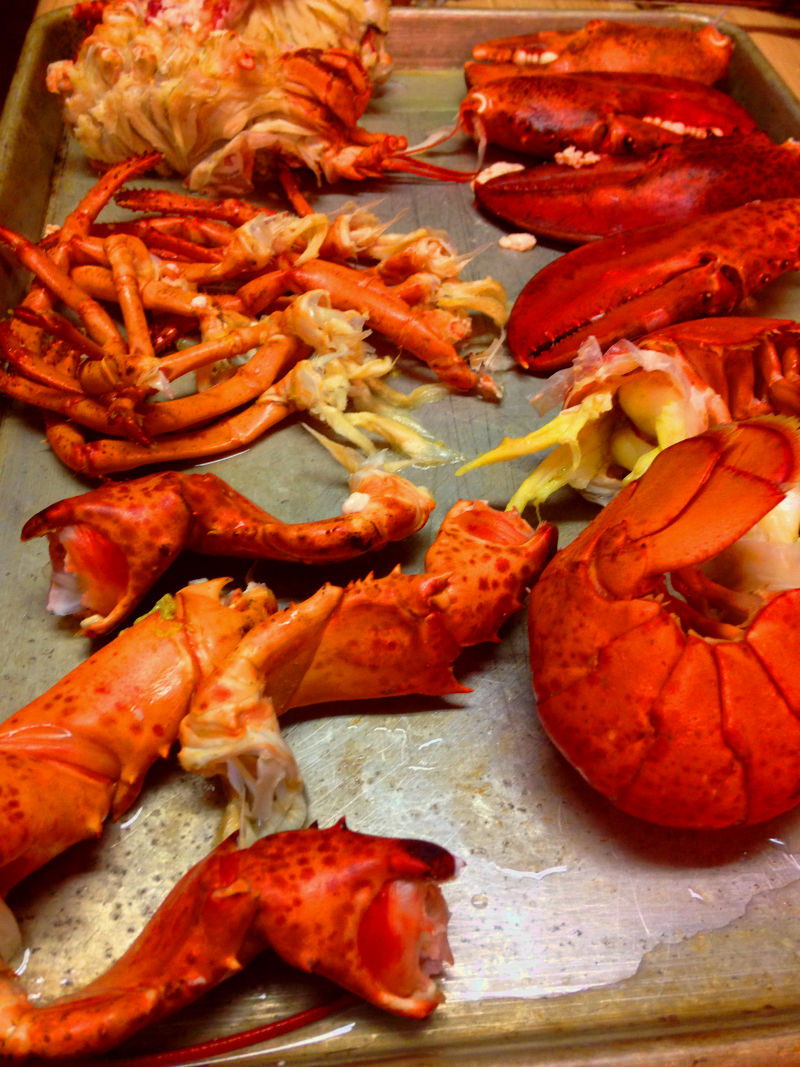 A most hated dish to me is overcooked, dried out lobster. It is sad that such a delicious creature gets so abused for our sake. Not the eating of lobster; I am fine with doing that, but the overcooking of it. For that reason I do not often order it in restaurants. Maybe it is unfair to assume they will screw it up, but it is what I do. My parents were the same way. They would not get them at restaurants, but buy them alive the afternoon they planned on cooking, and leave the suckers in the sink to wait. When I was young and short I would peek over the edge of the counter and see them moving around, with their claws bound in rubber bands. According to my mom, once one of those claws came towards me and I freaked out. Apparently it was hilarious. I am not sure if I thought so at the time.

If you have never prepared fresh, live lobster, from crawling to consuming, you are missing out. The meat cannot be compared to previously frozen tails or disguising of it in a lobster roll or dip. It is pure, sweet, meaty heaven. The reason for keeping them alive until right before cooking is to preserve them as long as possible. Like all shellfish, they begin to break down (organs and all) immediately upon death, so delaying it as long as possible is the healthiest, safest way to prepare them.

If you have never used clarified butter you may wonder why is it important to us it, instead of just melting butter right out of the fridge. It is my opinion, and that of many others, that if the butter is not clarified, with a hint of lemon, the butter will take over the flavor of the lobster instead of enhancing it, and leave a greasy film in the mouth. Leftover clarified butter is a great fat for cooking other things. It is the foundation of butter without the milk solids and water, so it has a high smoking point for cooking other foods and contributes a wonderful butteriness to whatever you cook.

Sadly, Brigit did not sample the lobster. After helping me buy them, watching them move around on the counter, then watching them lowered live into a pot of boiling water, I think she was squeamish about eating them. She might have been influenced by watching me tear it apart, claw by claw, tail by tail, then use kitchen scissors to open up the stubborn pieces. Maybe next time she will try it, for there will be a next time. The rest of our gang inhaled ever morsel, and sucked out the meat from the legs, like little lobster straws.

If you want more information about how to utilize as much of the lobster as possible, and dismantle it like I do, I recommend this video.

In a medium saute pan over medium low heat add butter and zest from one lemon. Heat until butter is melted and steaming. Remove from heat and pour butter through a sieve to remove zest. Let butter sit for 20 minutes. Skim off fat layer that forms on top. Pour the rest of butter into a measuring cup or clear glass bowl. Place in refrigerator and let chill for at least four hours.

In a large stock pot add enough water to cover both lobsters and squeeze in lemon juice from one lemon. Drop in lemon rinds and bay leaves. Bring water to a rolling boil. Remove rubber bands from lobster claws. Drop lobsters into the boiling water, head and claws first. Cover and boil for 15 minutes, until shells are red.

While lobster cooks complete the clarified butter. Remove butter from refrigerator and scoop out the yellow, clarified portion from the top, leaving separate the white, watery portion (water and milk solids). Heat butter over medium heat until melted and steamy. Remove lobsters from water and set on tray to cool. Serve whole or remove edible meat from shells and serve on a platter. Serve by dipping bites into the butter.