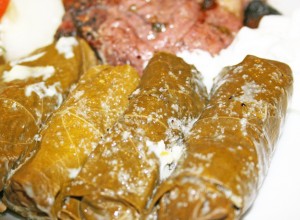 To conclude coverage of our Greek feast I share with you dolmas. Dolma generally means ‘stuffed thing’, and depending on where you are, the stuffed thing is some sort of vegetable – potatoes, squash, peppers, or tomatoes. After room is made in said vegetable they are filled with stuffing made of grains, vegetables and seafood or meat, which is then cooked. In this case we are leaning towards a Greek variation that involves stuffing grape leaves. The grape leaf version of dolmas can be eaten with fork and knife, or picked up as finger food. Personally, my method depends on how long it has been since I last had dolmas. I am more likely to use utensils if my last encounter with dolmas occurred recently; otherwise, fingers it is. To make them healthier and lower the carb count we used cauliflower instead of rice. I always like having dolmas  as part of a Greek meal – they are great hot or cold, can be made in advance (ideally at least the day before), and a plate of them can be easily shared if eaters are willing and generous. I hardly noticed the absence of rice in this version, since the cauliflower gave them a very similar texture to grain or rice. The lemon and egg coating gives them a nice tang, but it does not hurt to serve them up with a dollop of tzatziki as well. If you know me at all you would not be surprised that my dollops are more like glops, but to each her own. Big D helped with the logistics of making the dolmas, especially with separating the grape leaves, which he referred to as “a real pain in the a**”, and with filling them. I was not ignorant to the fact he got such an annoying, leafy task – the poor, innocent guy. Only through this post will he realize my true evil intentions when I sweetly said “can you help for a sec?” We are excited about using the steaming water as a base for soup. Maybe he will forgive me. Yay and Yum! I got some good suggestions for making the dolmas with cauliflower here.

Carefully remove the leaves from the jar and place in the sink or a large bowl. They are usually tightly rolled together in the jar and can easily be torn. Cover the leaves with hot water and allow to soak at least 15 minutes. Meanwhile, break the cauliflower into florets, removing the stems. Place the florets in the food processor bowl and pulse until the cauliflower looks like rice. This takes about 10 to 15 one-second pulses. Place “rice” in a large mixing bowl and put the bowl back on the food processor; no need to clean it yet.

(Optional) Heat a dry skillet over medium high heat, then add pine nuts and raisins, stirring often and cooking until the pine nuts are lightly toasted, about 3-5 minutes. Set aside to cool, then coarsely chop. Add the nuts and raisins to the rice in the bowl.

Place the lamb, onion, mint, parsley, garlic, salt, and pepper in the bowl of a food processor and steadily pulse the mixture until the ingredients form a paté and everything is combined. I have also used a pastry cutter when a processor is not available – it takes a little longer, but results work. Add the lamb paté to the “rice” and mix well. The easiest way to do this is with your hands: run them under a little cold water and dig in.

In a steamer basket place a few leaves — the ones that are torn or small — to mostly cover the bottom of the pan. There can be some gaps. Put enough water in the steamer base so it does not rise above the bottom of the basket. Cut half of one lemon in half and drop the quarters in the water. Bring the water to a boil while you prepare the dolmas. Drain the water from the rest of the leaves. Place a leaf on a flat surface with the shiny side facing down, veins facing up. Snip off the stem, and place about one mounded tablespoon of filling on the end of the leaf closest to you, where the stem attached before you whacked it. The filling amount can vary, depending on the size of the leaf you are using. Roll from the bottom until the filling is covered by one layer of leaf. Fold in the side flaps and keep rolling until you have a cigar shape. You want to roll them pretty tightly so they don’t come apart during the cooking process. This is different than traditional dolmas where you want to leave a little wiggle room for the rice to expand during cooking. The cauliflower actually shrinks as it cooks, so roll them up tight, but be gentle not to tear the leaves! Place the rolls in the pan and nestle them up against each other. There can be multiple layers if needed, but place the layers crosswise so air can circulate. They will all get cooked.

Cut half of one lemon into thin slices circles and arrange the slices on top of the dolmas in the steamer. Place the filled basket over the boiling water. Cover with a lid, turn the heat way down to a gentle simmer and cook 25-30 minutes, until the leaves are tender but not falling apart. Remove the steamer and pour out the water from the base pot. Replace the steamer into the base.

In a small bowl, whisk the juice from the remaining lemon with the egg until frothy. Remove lemon slices from the top of the dolmas. Pour the frothy mixture over the dolmas, then put the lid back on and let the sauce set. The hot dolmas gently cook the egg/lemon sauce to create a tangy coating.

When the sauce sets, about ten minutes, remove the dolmas from the pan, place covered in the fridge, and wait until they’re chilled. They taste great cold, room temp, or hot — but are best if reheated the day after preparation, rather than eaten immediately when they come out of the pan.