Don’t Have To Choose Salad 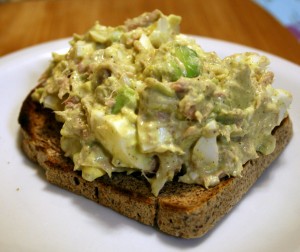 My food hankering today was conflicting. Do I want egg salad, tuna salad or guacamole? To take full advantage of my indecisiveness I decided to combine them all. I have never combined the three dishes before, so why not now? I wanted the flavor of all three to be present and also work together. I think I did a pretty good job, and it was a great way to use up the last avocado sitting on the counter – not enough for guacamole, or for topping a batch of chicken, but such a delicious thing shouldn’t go to waste. Tuna is a great way to add protein to a dish, even if there is already protein eking out of the avocado and egg. This salad was delicious sitting atop toasted Julian’s paleo bread. Reminded me of egg salad sandwiches on Lenten Fridays when I was a kid. We would have macaroni and cheese, salmon patties, tuna or egg salad. I understand the symbolism of no meat on Fridays, but feeling less lust or anger in the absence of meat on my part was not actually achieved. Feeling an excess of either was not an issue when I was a child, but one day a week is not what I consider an actual test. To get away from the nostalgic and dogmatic reasons for making the salad, it met my hankering and indecisive needs.

Don’t Have To Choose Salad

In a large bowl mix yogurt, juice, mustard, salt, cumin, chili powder and pepper. Roughly chop eggs and avocado into pieces about the same size. Gently mix the tuna, avocado and eggs with the dressing, trying not to smash much of it. Chill for about an hour before serving.