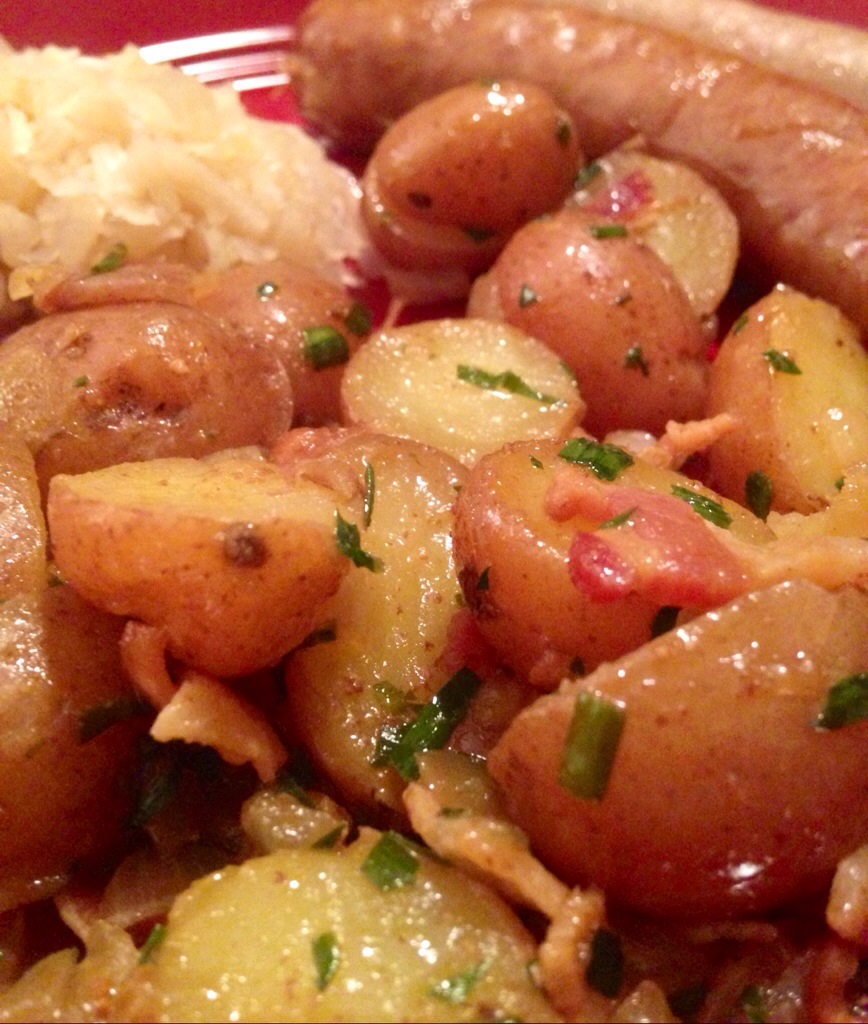 I am a bit evil on this one. The good thing is, I can blame Little B. We were doing a multi-day lesson with her about Germany, leading up to local Wurstfest celebrations. Believe me, she was absolutely adorable in her uncle’s old lederhosen! As always, if there is a slim chance that food can be included in a learning experience I will find it. There was cabbage at bratwurst and apples flying all over the kitchen. For this salad I was sorely tempted to find a substitute for the starchy new potatoes, but in the end went with the real thing. My big excuse was that I was trying to make as authentic a German dinner as I could, with guests coming over for it to boot. I had already tweaked a dessert to be less than authentic, and got store bought saurkraut, so I caved and went pure with the salad. This by no means prevents me from making a less starchy, lower carb version in the future, but I can definitely say that I know how to make an absolutely delicious German potato salad now! I really don’t see why turnips or parsnips (and maybe a little cauliflour) can’t be substituted for the taters. If you try a version of this recipe with them let me know how it goes! Back to behaving now…

Place the water and salt in a large stock pot. Add potatoes. Bring water to a boil and continue cooking for about twenty minutes, until potatoes are tender. Drain water and set aside potatoes to cool. While potatoes boil prepare the bacon. In a large skillet over medium high heat cook the bacon until crisp. Remove the bacon and crumble, then set it aside, retaining the bacon grease in the pan. Lower heat under the grease to medium and add onions. Cook onions until soft. While onions cook slice the potatoes into halves or quarters so they are bite-sized. Return crumbled bacon to the pan with onions, along with the stock and vinegar. Continue cooking until mixture is hot. Add potatoes to onion mixture, tossing gently until they are coated and hot. Sprinkle with salt if needed to enhance flavors. Add chives and toss again. Serve immediately or reheat to serve warm.