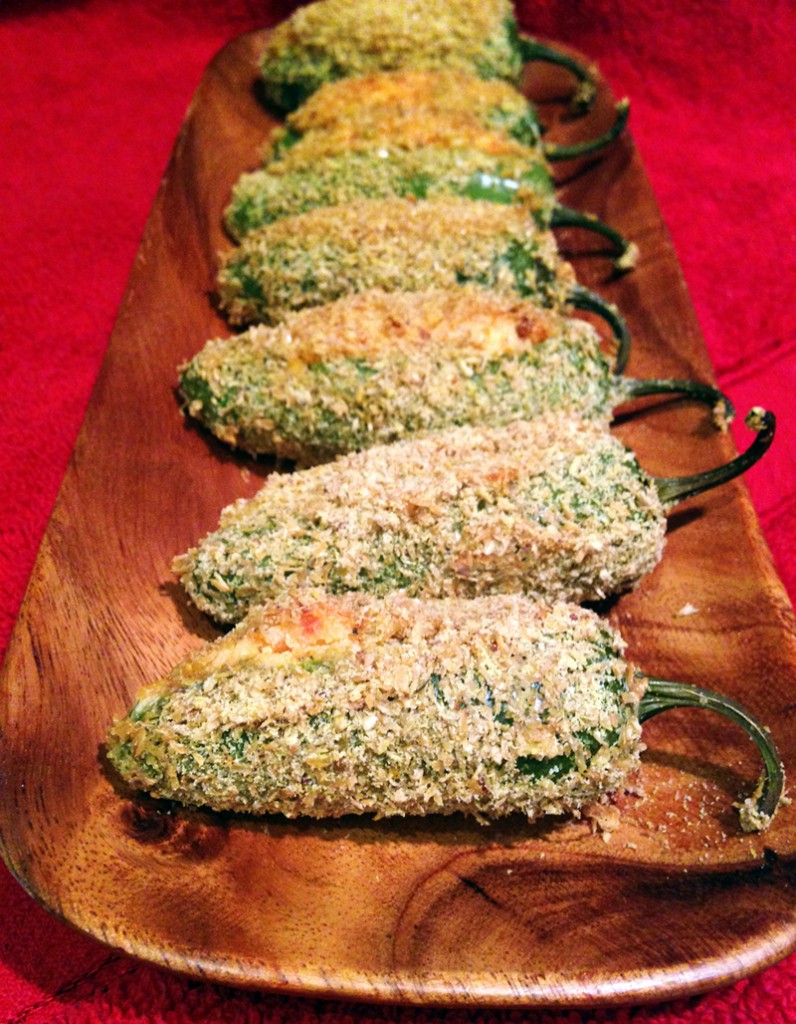 During the first year of my blog I made some addictive jalapeno popper dip. It had the stuffed jalapeno taste and we spread it bumpily on almost everything until the last spoonful was gone. After finding jalapenos on sale at the store the other day I decided it was time to again delve into the jalapeno popper world, with the intent of creating a more original result. We have experimented with finding a coating that bakes up crisp during our foray into making Scotch Eggs. Confident in our knowledge  from many egg batches, we applied the same idea to these poppers. Instead of making it easy on ourselves by cutting the peppers in half and stuffing them, we wanted them whole, but also breaded! Why keep it simple and wrap them in bacon? Hmmm….bacon. Not this time. Much too easy and predictable. We wanted to taste the peppers, which would be harder if the bacon was involved. It is a very domineering ingredient, although it goes with almost anything. Now I want some bacon…..but on to the bacon-less poppers! The filling stayed in the poppers and kept them filled, the breading stayed stuck, and boy did we taste the peppers! We expected a varying level of hot among the peppers, as is typical, but Big D got quite a surprise. He must have bit into a seed cluster juuuuust right, for he went running for a drink, then dove for a piece of bread, where he finally found relief. It is rare when he gets over heated by spice, much less have tears well in his eyes because of them. I had no such biting surprise, but really enjoyed noshing on the poppers and relished their return to our growing list of things-we-gave-up-and-missed-but-now-have-back-again. Yay!

Preheat oven to 350 degrees. Lay jalapenos on a flat surface and figure out which side they rest on most stably. On the side opposite of the resting side cut a narrow opening that stops short of both ends lengthwise – narrow enough to keep the stuffing in, but wide enough to clean out the seeds and pulp from inside the pepper. Leave the stem attached. With a small spoon or narrow knife gently scrape out some seeds and pulp, making room for the stuffing. Set aside the jalapenos. In a medium bowl place the cream cheese and cheddar cheese. Heat in microwave on 50% power for one minute, until softened. Add 1/2 tsp garlic powder, 1/2 tsp cumin and 1/2 tsp sea salt and stir until ingredients are combined. Using a small spoon gently push cheese mixture into the jalapenos until they are full, or the filling is used up. Place the egg whites in a medium bowl and whisk until slightly foamy. In another bowl combine the flaxseed meal, 1/2 tsp garlic powder, 1/2 tsp cumin and 1/2 tsp salt. Dip each stuffed jalapeno in egg whites, then roll in flaxseed mixture until well coated, pressing some of the meal against the pepper where it does not instantly cling. Gently place coated jalapenosin a small baking dish, with a little space between. Bake for about 50 minutes, until coating browns and peppers are soft. Remove and let cool for five minutes. Serve with ranch dressing or other dipping sauce.