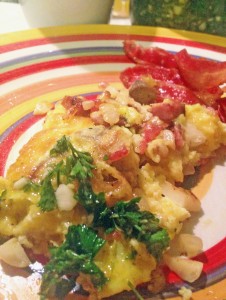 Long long ago I owned an omelet pan. It was a nice omelet pan, used often to whip up the eggy concoctions. Less long ago I got rid of it. Not because it was unused, but in many respects redundant. Can’t the same thing be done with a frying pan? Over the years we have stocked and unstocked kitchens in our travels and moves. Often the ‘specialty’ devices get purged. You know what I mean – items that do one thing that can easily be done with another, like an avocado slicer (replaced by knife), smoothie maker (replaced by blender), or egg seperator (replaced by a hand or shell) or a food chopper (replaced by knife), or the omelet pan (replaced by a, well, pan). You get the idea. The omelet pan was sacrificed during one of these purges and not replaced. My omelets don’t look as pretty these days, but they sure taste good, and don’t stick. I am also an advocate for having the ingredients mixed and cooked up with the egg, not placed in the equivalent of an egg ‘taco’, like some restaurants serve – egg part of the omelet gets overcooked separately, then the actual ingredients get dropped in, egg gets flopped over it and served. If I wanted a taco I would order one. Anyway, here is a lovely combination, and my approach to making an integrated omelet, which I also addressed about two years ago with an onion omelet, which is still one of my standards, but tastes totally different. Enjoy both of them!

Heat bacon grease over medium-high heat. Add onions and garlic, cooking for about five minutes, until they begin to brown. Add meat and heat through. While meat and vegetable cook crack the eggs into a bowl, sprinkling with salt and pepper. Whisk eggs until uniform. When meat and vegetables are ready shuffle the pan so they are evenly distributed on the bottom of the pan. Turn heat down to medium-low. Pour in egg, tilting pan until the entire bottom has a layer of egg. Sprinkle cheese evenly over the top. Cover and cook for a few minutes, until egg begins to set. When edges hold their shape, carefully flip one half over the other. Slide omelet to the middle of the pan and cover, cooking for another minute to let egg set in new position. Turn off heat, cut omelet into three or four equal pieces and serve. Suggest serving with chimichurri, a side of bacon and some bread.