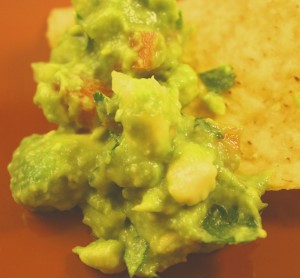 Once again my food preparation decision is strongly influenced by what was on sale at the store. I live in a small town in Texas. There are two options for groceries – Walmart (yuck) and a a regional chain. I gave in and got a discount card for the local place, especially since they let me do so without giving a bunch of personal information, and they have REALLY good deals that I would otherwise have to drive 30 miles to get. This week avocados influenced me. Not only were they on sale, but they were grown in Texas. YeeHaw! I bought ten of the suckers, knowing that I can freeze some if I overdose on the green stuff.

When I first started making guacamole at a teenager I would throw everything in a blender, add sour cream and make it a smooth, creamy dip. I don’t recall why I started making it smooth, because I was surrounded by people who preferred creating chunky versions. Maybe it was my way of being a rebel – I toilet papered a few houses and made smooth guacamole. Scary.

Now that I am a big girl I make it chunky. Besides the fact I do not currently own a blender, I really like not knowing if I am going to bite into a piece of tomato, onion, jalapeño or avocado. It is a comfort food for me and I will be eating a lot of it because, well, avocados don’t freeze well unless you mush them all up with some lime juice. I guess if I end up freezing avocado I can just thaw it out later make a batch of smooth guacamole…anyone got a blender?

Salt and pepper to taste

Cut avocados in half lengthwise. Carefully remove the pit (I usually strike it with my knife blade and twist). In each half cut the avocado meat in a crisscross pattern. With a spoon scoop all the meat out of the skins into a medium bowl. Add the remaining ingredients, keeping the lime juice for last to pour over the top. Stir it all together with a fork, adding salt and pepper to taste and smashing some of the avocado. To prevent the top from turning brown during storage, cover with cling wrap and press it down against the guacamole until all the air is pushed out. Chill for at least an hour, then let it warm to room temperature before serving.