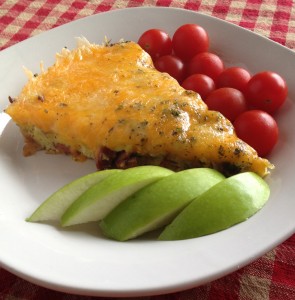 Yep. We are on a run of two meals a day. Not because we are watching calories or anything, but because we are having big holiday lunches or dinners, or leftovers of big holiday lunches or dinners, so any other meals are simple and small. For example, we have quick plates of eggs and greens, or a plate of antipasto because of a big meal happening later. Here is a meal that can use leftover meats and will keep you filled until “the” big meal later. A fritatta is easy to put together while also giving you (aka, me) a few minutes sit and sip some coffee while it cooks, but before digging in. Besides the holiday balancing of big meals, this is something we have on weekend mornings when we are not exactly sure what to do for the day. It is a great time to sit and ponder what we are going to discover in the world with Little B. The awesome part these days is that Little B is very vocal about what she wants to do, and not do, so having a conversation with her about our activities while brunch cooks is pretty darned cool.

In large frying pan add oil over medium heat. When oil is hot add garlic and onion. Cook until they begin to brown. Add sausage, ham and broccoli. Toss and cook until broccoli begins to wilt. In medium bowl while meat is cooking add eggs, basil, oregano, parsley, cumin, salt and pepper. Whip until eggs yolks and whites are combined and spices are mixed up. When meat is ready add eggs and stir until meat mixture and eggs are combined. Turn heat down as low as possible and sprinkle cheese on top. Cover pan and cook for ten to fifteen minutes, until eggs are set and cheese is melted all the way to the middle. Remove from heat and leave covered for about ten minutes. Uncover and slice into wedges. Serve with fresh fruits and vegetables.