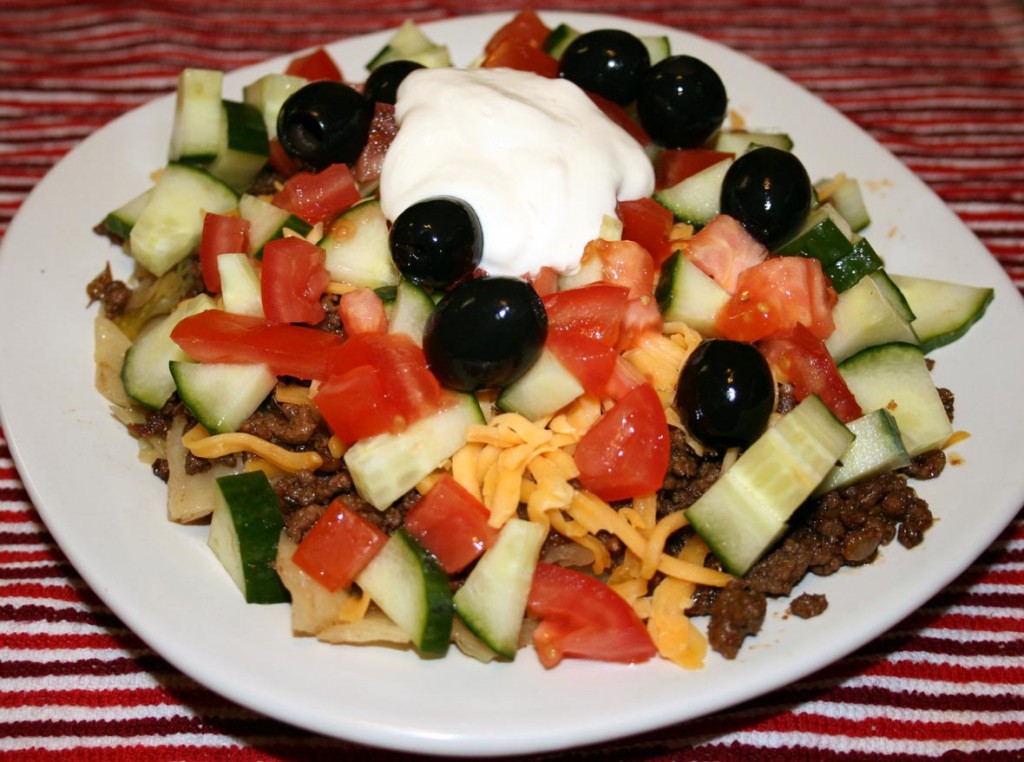 I give up. My nagging of Big D to write a guest post here in my space and talk about some of the awesome meals he makes our family is over. I would love him to update here after he sees it and make fun of all the ‘mistakes’ I make in the ingredients and process. This is the best way I know of to goad him into talking food here. If he does, you will get a taste of his instinctive method of cooking. If he doesn’t take the bait, you still get a recipe from me that reflects a basic version of what we create, eat a lot of and enjoy. I spicing varies with every batch, but it is so easy to make a big pan of it and have it around for quick meals. You can never go wrong using a package of ground beef with this recipe. It reminds me of Texas and the two week party in San Antonio called Fiesta! It happens every April, and seeing the pictures coming out of San Antone recently, along with the memories of partying it up myself when I lived down there, gave me a serious hankering for some good taco meat. Not what you get out of a prepackaged mix, or find in a school cafeteria, but the real taco meat I grew up with, as did Big D. We like it really spicy around here, and achieve an acceptable level of spice with the wonderful smokiness of chipotle peppers in adobo sauce. They are optional, of course, but add a level of flavor Big D and I  have not found elsewhere. Big D often eats it simply as a pile of meat and cheese, occasionally with some vegetables underneath. You can see from the picture I often surround mine with sauteed veggies underneath (this time with cabbage) and top it with tomatoes, cucumber, olives and sour cream. If you look closely, you will actually see meat! The meat can of course also be served with tortillas, but we don’t keep such things around the house anymore. Take a siesta and enjoy!

In a large skillet over high heat add grease. When it is hot add the cumin seeds, red pepper flakes and optional chipotle peppers. Stir frequently until they begin to darken. After a few minutes add the garlic, chili powder, cayenne pepper, cumin powder and optional adobo sauce. Stir for about a minute until it too darkens. Add the onion and cook until the onions begin to sweat and brown. Add the ground beef, breaking it up into small pieces while also combining it with the onion and spice mixture. Add ½ tsp salt and continue stirring. When about half the liquid has reduced, about five to eight minutes, add the beer. Sip on the rest of the beer in the bottle. Continue cooking over high heat until the liquid reduces again. When most of the liquid is cooked off turn down to medium heat and continue cooking until most of the liquid is gone. The meat should begin searing. Drink some more beer. After searing the meat for about a minute turn down the heat to low and simmer. Taste and add more salt to preferred saltiness. Let sit with the heat off for about ten minutes before serving.