Archive for the category “leeks” 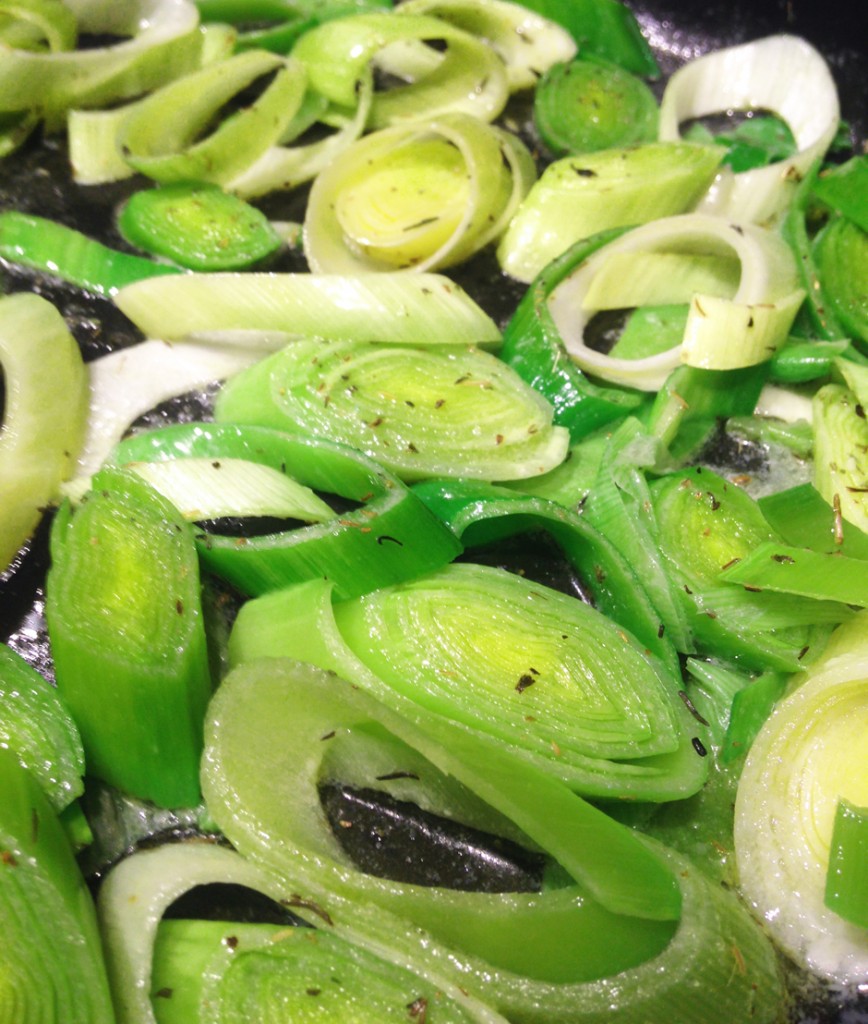 March is fun in our household. We are big on celebrating St. Patrick’s Day, and up here in Alaska the daylight stretches further and further, making up for the dark winter days we are quickly forgetting. I don’t want to focus on the fact that this is a traditional Scottish dish. I want to focus on the fact it is very green! Can you do that with me? The ground is turning green, the trees are shooting out little green leaves, the flowering plants are shooting up and begging to bloom. Even the moss around here is turning from wintery dull brown to a dozen shades of green. Buttered leeks do the same for our dinner. I really like how they brighten up a plate and uses the whole leek. So many recipes involving leeks focus on the white part and pretend the green parts don’t exist. Where do they think the white parts would be without the green? Never disrespect the green. 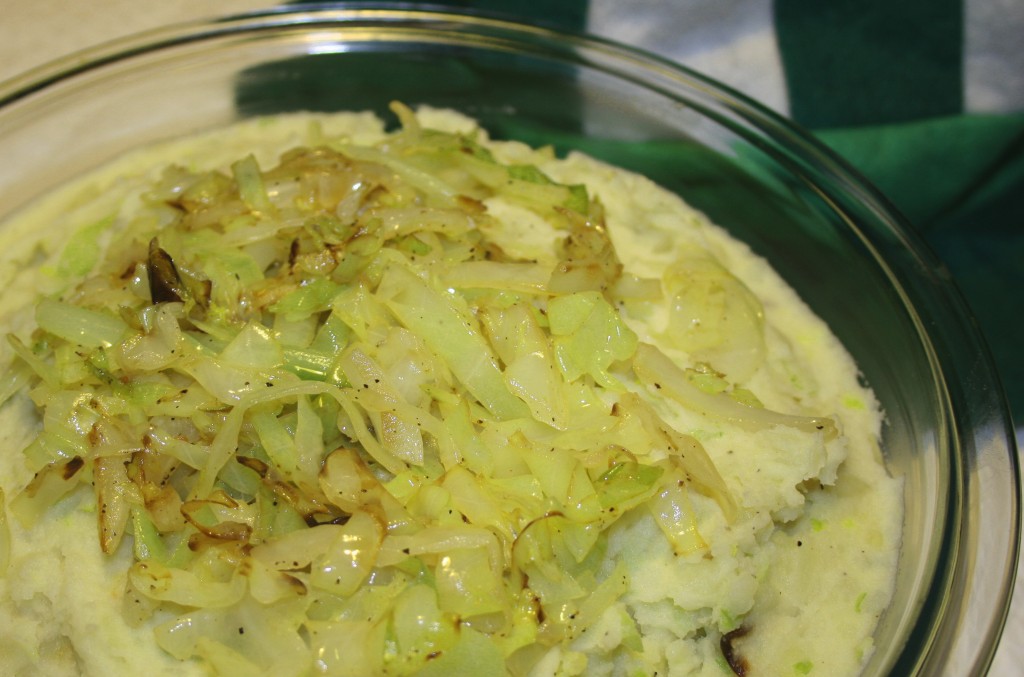 It is March! March means two things to me – the world changes from brown to green and the 17th of the month is one of my favorite days of the year. As St. Patrick’s Day nears I ponder more and more the Irish dishes I consider comfort food. Frankly, when I think of Ireland and food my thoughts do not often float beyond seafood and potato dishes. My ancestors survived on such things, so it is no wonder I enjoy exploring them. Traditional Irish-American foods that start popping up around St. Patrick’s Day usually include corned beef, but pork is more often the protein in Irish dishes. Over the next few posts leading up to St. Patty’s Day I am going to cover some of my favorite Irish dishes, prepared in ways my family enjoys them. Let’s see where this journey takes us! I am starting with colcannon, which goes well with pork. Go figure.

The traditional versions of colcannon I have come across include boiling. A lot of boiling. I can boil everything and mix it together as was done in the past, but I am partial to sauteed cabbage. The searing of cabbage that is barely crispy and just becoming tender makes me melt. I guess you can say I make a hybrid of colcannon and bubble and squeak. I am okay with that statement. If you are like me and serve colcannon with meat, at the last minute you suddenly worry that you forgot to make a vegetable for dinner. Never fear. The cabbage IN the colcannon is actually the vegetable! Big D got a laugh out of my omigosh-I-forgot-the-veggies moment.

Chop potatoes into equal sized pieces (about 4-6 pieces per potato). Drop potatoes into boiling salt water and cook until tender, about 20 minutes. Drain and set aside. While potatoes are cooking, core and thinly slice the cabbage. In a large skillet melt 1 Tbsp of the butter over medium high heat. Add cabbage and toss to distribute the butter. Turn down the heat to medium, add salt and pepper to taste and cover, cooking until cabbage is tender. Occasionally toss the cabbage, allowing some browning to occur. While the cabbage is cooking add the remaining butter to a small sauce pan and melt. Add leek to butter and cook until transparent. Add milk and simmer until heated through, using salt and pepper to taste. Mash the potatoes until smooth (they may look dry). Add the onion mixture (the potatoes won’t look dry anymore). Add the cabbage, setting aside about one cup for garnish. Stir until all is combined. Top with the set aside cabbage. Serve hot. 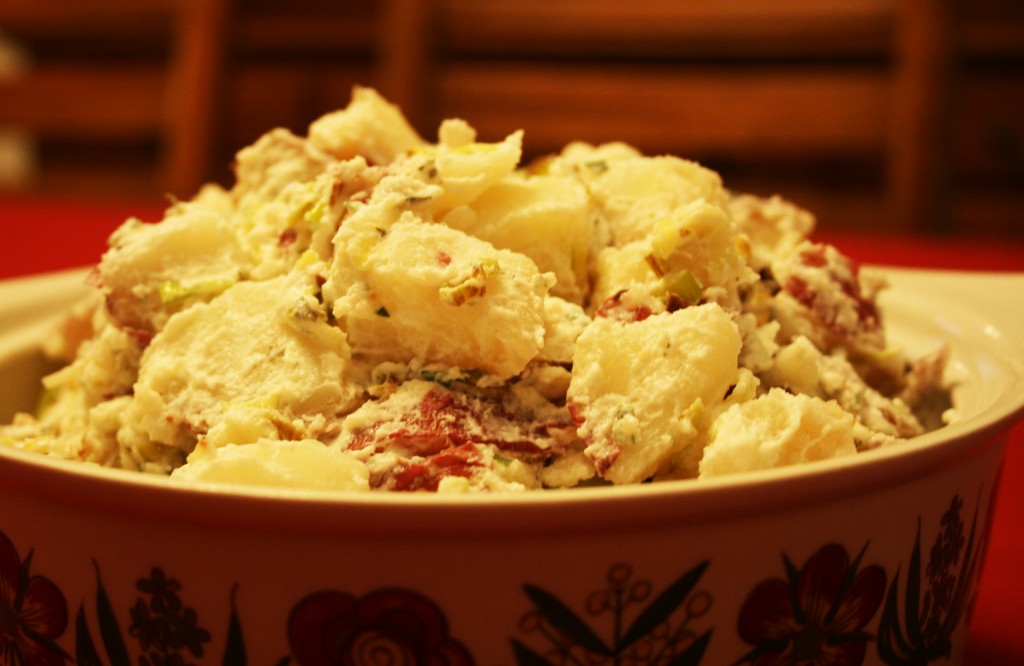 I am on a quest to eat food I love while reducing the fat and calories of said food. It is difficult because I love bread and butter and beef and pasta and cheese. Oh the cheese! I understand the concept of moderation, and practice it as much as possible, but when food is good it is so easy to be bad. Where potato salad is concerned I like the kind dressed with mayonnaise and mustard, complimenting a pile of smoked brisket or ribs. The other night I could not sleep and craved the not-so-good-for-me potato salad my dad made in big batches for years. He would smoke meats for hours and hours. When the meat was a few hours from being done he would make the potato salad so it could chill and allow the flavors to meet each other. I say he made the salad, but it was actually a group effort. My mom and I would boil the potatoes and eggs, chop the onions, bell pepper, celery and herbs. Dad would inspect our work and let us know if the chop size and quantities were just right, or we needed to work on them a little more. He would pull out the huge green glass bowl from the cabinet and put all the ingredients together, taste testing to see if it needed a little more of this, a little more of that. When he was done with his part it was again time for mom and I to swoop in and decorate the top with bell pepper and egg slices, finishing with sprinkle of paprika. I loved my dad’s potato salad, but it was far from healthy. In my desire to eat healthier and not fade away from complications of diabetes, which took his life last year, I offer the following dish. It appeases my potato salad craving without as much in the way of fat and calories. Enjoy!

Cook red potatoes in gently boiling salted water until tender, about 15 minutes, depending on their size. Drain out the water, letting the potatoes cool and dry out (in the refrigerator for faster results). Separate white and green portions of the leeks, discarding the tough outer and upper dark green potions. Thinly slice white/light green sections to form rings. Heat large sauté pan to medium high. Add oil. When oil is hot add leeks. Stir regularly to prevent burning, but not so much that the leeks are prevented from browning. Sprinkle with salt and pepper to your liking. After about 10 minutes add the mushrooms and cook for 5 – 10 more minutes. Set aside to cool. Cut potatoes into bite sized pieces. In a large bowl combine yogurt, juice, garlic, tarragon, parsley and a dash of salt. If the dressing tastes a little salty do not worry – it will be spread among the potatoes which will absorb it. Add leeks and mushrooms to the dressing. Toss potatoes with dressing until coated. Refrigerate until chilled through before serving, at least two hours.

*I prefer to leave the skin on red potatoes for this recipe, but of course if you prefer they can be peeled without significantly affecting the final product. Go ahead – reject the most nutritious part of our root friends. I’m sure they won’t mind…