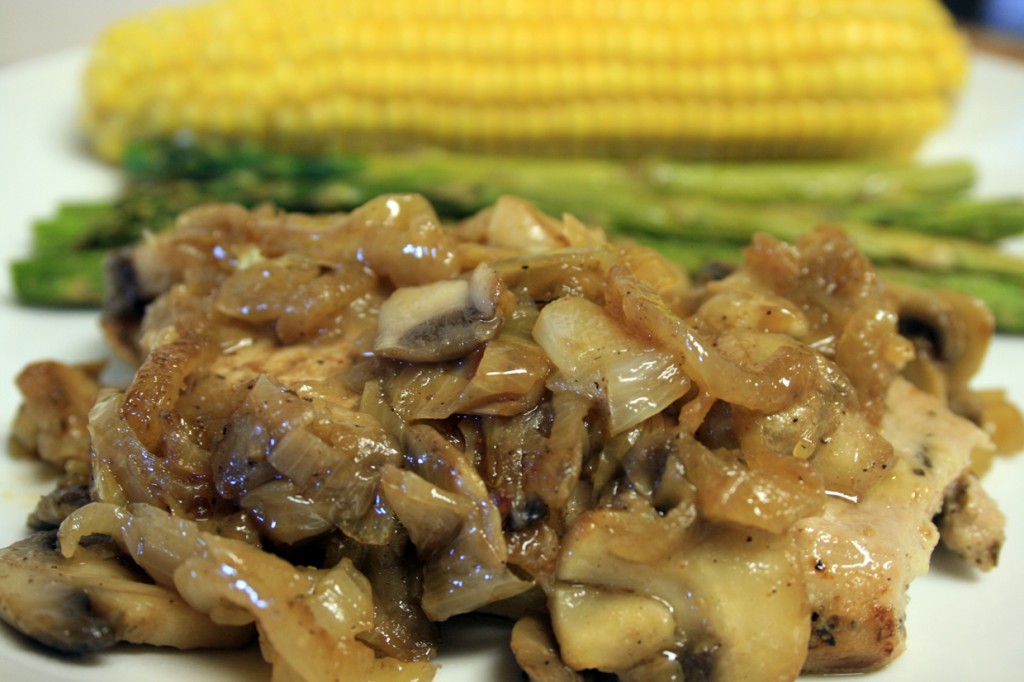 Pork chops are my friend and foe. It is so easy to over cook them, yet under cooking is just plain unappealing. The perfect balance is of the pink just recently disappearing and the chops beginning to firm up is ideal, but sometimes hard to accomplish. My solution in most cases is to smother them. It often does not matter what is used to smother, just have something to go with the chops is the goal. Sometimes I use some homemade applesauce (try it, I promise you will like applesauce and pork), other times it may be a smoky, spicy chipotle sauce. This time, I used onions and mushrooms. The good thing about this combination is that Big D and I love them. The bad news is that Little B and Tall P are not so fond of onions and mushrooms, putting them at risk of having plain chops. I considered this predicament before I started cooking, thus, the limy marinade. I served them up with some roasted asparagus and corn on the cob to make a nice, bright spring dish. The chops worked well without the smother too, especially when sliced thin for Little B, after she inhaled the corn. Tall P ate all the leftover chops the next day, so all was well in our land.

Salt and Pepper to taste

In a resealable bag combine garlic, thyme, onion powder, chili powder, salt, black pepper, lime juice and olive oil. Smoosh it around until the marinade ingredients are mixed up. Add the pork chops. Seal the bag, letting out as much air as possible. Spread out the chops in the bag until they are all one layer and thoroughly coated by the marinade. Let sit for at least 30 minutes, turning over at least once. While the chops marinate make the smother. In a dry medium saute pan over medium high heat add the onions. Toss sparingly until they begin to sweat and brown/caramelize, about five minutes. When there is some caramelizing on the bottom of the pan add ¼ cup of water. Scrape the bottom of the pan and stir until the caramelizing dilutes in the water and begins to make a sauce. It will all turn a golden brown. Continue cooking over medium high heat until the liquid mostly evaporates, probably another five minutes or so. When most of the liquid has evaporated and there is more caramelizing on the bottom of the pan, add the remaining ¼ cup of water, scrape the bottom of the pan and continue cooking until the sauce begins to evaporate again. Add the mushrooms and a little salt and pepper. When the mushrooms begin to sweat and soften, turn the heat down and let simmer until the sauce is reduced by half. Add the butter and stir until it is completely melted. Set aside and keep warm for serving. Remove pork chops from the marinade and gently pat dry to remove some of the marinade liquid. In a large dry frying pan over high heat add the chops and cook on each side for about a minute to sear. If there is extra liquid it may take a few minutes longer. When both sides are browned cover the pan and reduce heat. The pork chops will release more liquid and keep them moist while the pork cooks completely. When the pork is well done (about 165-170F), turn off heat and keep warm until time to serve. To serve, place a pork chop on the plate, drizzle a little juice from the bottom of the pan over the chop, then top with the onion and mushroom mixture. Serve immediately.